Having been in the mortgage business for about 24 years and in the financial services industry as a Series 7 Licensed Representative for Fidelity Investments for 2.5 years prior to my employment as a loan officer, I always cringe a bit when people, consumers, loan officers, or Realtors, talk about getting the lowest rate.  There are a number of things that determine the interest rate as far as a specific borrower is concerned including the borrower’s credit score, the property type (detached vs. attached), occupancy type (primary home vs. 2nd home vs. investment property), and how much of a down payment the borrower is putting down (check my post on down payments).

From a broader perspective, the mortgage bond market determines what the base interest rate is on any given day, more specifically, the FNMA benchmark bond (currently the 4.0 bond as of this writing) is what determines rates on conventional loans and the GNMA benchmark bond (also the 4.0 bond as of this writing) determines rates for FHA and VA loans.  The 10-year treasury bond is also a good one to follow when trying to see where rates are headed.  Rates move inversely to bond prices so when investors are buying bonds (ie when there is a bigger demand than supply) prices go up and rates go down.  Conversely, when investors are selling bonds, price goes down and rates go up.  In general, while people buying homes who need a mortgage or those refinancing their existing mortgage loved the low rates we had during the financial markets meltdown of 2007 – 2012, low rates are usually a sign of a bad economy.  When jobs are plentiful and the economic data is strong (watch data points like consumer confidence, the ISM manufacturing and non-manufacturing index, Average Earnings, PPI and CPI, Non-farm payrolls, Initial and Continuing Weekly Jobless Claims, Chicago PMI, GDP, Durable Goods Orders, Philly Fed Manufacturing Index, Existing Home Sales, Housing Starts and Building Permits, Capacity Utilization, University of Michigan’s Consumer Sentiment Index, Retail Sales – including ex-auto, Personal Spending, Personal Income, and PCE, along with a few others), rates will usually trend up.  In order to curb inflation because of an overheated economy, the Fed raises rates to make borrowing more expensive which makes it more expensive and risky for businesses to expand / grow.  As rates on bonds go up and prices go down, bonds become more attractive investments to investors.

Another thing that influences interest rates beyond the whims of the financial markets – and they have been rather whimsical over the last several months – are geo-political events which can have a major impact on rates.  Investors (major institutional investors) hate uncertainty and when something big happens like a major terrorist act or a war, the stock markets typically go down and bonds (prices) go up with what is called a “flight to quality / safety.”  Major natural events like hurricanes, tsunamis, and earthquakes can also have this kind of effect on the financial markets.

So How Does a Buyer Get the Lowest Rate?

I think the first thing is finding a loan officer that has integrity.  Even now with all of the regulation in the mortgage industry, I still see lots of loan officers quoting unreasonably low rates in an effort to get borrowers to choose them with the borrowers finding out later that “rates went up” when they have to lock at or above where other lenders were quoting in the first place.  This is probably the trickiest part of trying to get the best available rate because it’s not always easy to know if the person you are working with is someone you can trust.

The second thing after finding a loan officer you can trust is to find one who also has a good understanding of the financial markets, specifically the mortgage bond market.  It’s important to work with a loan officer who doesn’t just watch rates but actually watches the bond markets since a good bond chart can show data and trends that isn’t available by just looking at rate sheets.  Here is an example of a good bond chart – it’s a candlestick chart that has a 1st and 2nd level of resistance and support, a choice of moving-average overlays (this one currently has the 100-day moving average activated), and the RSI (Relative Strength Index).  The chart also allows the mortgage professional to switch between different FNMA and GNMA bonds as well as the 10-year treasury. 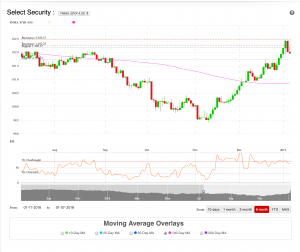 The important thing to remember is that even the most season loan officer with the best information can’t guarantee what rates will do, it’s about making an educated guess.  If you know how to ready the charts, you are much better off than if you just look at rate sheets.  Other factors that can play a big roll in interest rate movement is when the Fed announces their rate policy (this happens 8 times a year – unless they have an emergency meeting) or when one of the Fed Presidents speaks and gives some bit of a hint as to his / her thoughts about the economy or rates.

Most lenders a borrower is likely to work with sells their loans, at least the interest rate rights – some may maintain servicing rights.  A mortgage broker doesn’t close the loan in their company name – the loan is closed in the name of the lender they are selling the loan to.  A mortgage banker closes the loan in their name and then sells the loan either to a larger regional or national bank or, if they are a direct lender, to FNMA or FHLMC for conventional loans and HUD for FHA loans.  Most direct lenders want you to think that they have the best rates because they sell directly to FNMA and FHLMC.  That is not always the case since some of the lenders that mortgage bankers and brokers sell to are bigger than some of the direct lenders and get better pricing because of their quantity and quality.  I worked for a direct lender before coming to my current employer who is a mortgage banker but not a direct lender and we have better pricing than my previous employer along with better underwriting guidelines since we don’t have as many overlays – which is a topic for another day.

Timing is also crucial in a couple of ways.  First, if you lock too early and rates improve, you may be stuck with a higher rate than if you had floated for a bit (some lenders have float down options and can mitigate this risk to some extent – we do).  Conversely, if you decide to float, you run the risk of rates going up and then being in a position where you have to lock so that you can get loan docs in time to close your transaction by the contract date.  Working with a knowledgeable loan officer and then communicating with him / her everyday until your loan is locked is extremely important.  Another way that timing is critical is based on the lock period.  Standard lock periods are 30 days; most locks longer than that typically have costs associated with them like 1/8th of a point per 15 days for the first 30 days and possibly higher the longer you go out.  If you lock your loan right at the beginning of the process and then there’s a delay, you run the risk of either blowing the lock altogether or at a minimum, having to pay for a lock extension.  I recently had a client who locked their loan on a 45 day lock with 39 days to go before the contracted closing date (COE – close of escrow) and had to extend the lock a few days because the buyer of his house had a delay in the closing of the sale of their house – luckily rates had improved enough to get him a free 7-day extension.

The Facts About Rates

When talking about getting the lowest rate possible, a discussion on buying the rate down is important.  If the rates are at multi-year lows, it’s good to think about buying the rate down if the buyer / borrower is going to be in the house long enough for it to make sense because it’s not likely the borrower will have an opportunity to refinance to a lower rate – especially if the multi-year lows are also near all-time lows.  If the rates have been trending up and it doesn’t look like they’ll ever be as low as they were for a long time, it may also make sense to buy the rate down.  However, if rates are at average levels or higher and may move down over the next couple of years (interest rate cycles are typically 5-7 years – our current cycle is an anomaly), buying the rate down may not be prudent.  Buying the rate down typically results in a net improvement to rates no more than .25%-.375% – it depends on the yield curve but pricing typically gets increasingly more expensive the further away from the par rate the rate is you are looking to buy down to.  Conversely, if rates go down as part of the interest rate cycle, you may see an improvement in rates with a refinance of 1% or better in many cases which means the money spend to buy the rate down .25% with a break-even period of about 5.5 years (on average) isn’t good if rates go down enough such that you could refinance your mortgage at a time less than the 5.5 year break-even period and get a much better rate than the buy-down rate.

And in the End…

After all is said and done, getting the best rate is a combination of working with a loan officer you can trust and who is knowledgeable as to the bond market and the information that can be gleaned from the bond charts, who’s company offers good rates, and a good guess as to how long the borrower will be in the home (or at least the mortgage).  Of course, this also assumes the borrower has the money to buy the rate down or that may not be an option – unless the market is such that the seller might be willing to make such a contribution.