An important question with regard to any loan is “Should I lock?” or When should I lock?”  No one ever really knows for sure.  I have a pretty extensive background in investing (I was a Series 7 Licensed Representative for Fidelity Investments in the mid-90s) so I’m familiar with a lot of things that the average loan officer isn’t – things like support and resistance levels, relative strength index (RSI), how bonds work (typically) relative to the overall market including stocks, and in relation to economic data (which there is a lot of).  That said, markets can change on a whim and they don’t always do what is expected.

Case in point, I had a client who is a financial planner.  We talked about whether to lock or not and I told him that the RSI was right at the oversold threshold.  Typically, this means that there is a good chance of buying which would push the price of bonds higher and, since rates / yields move inversely to price, rates lower.  We both thought it was a good idea to float for a bit.  About two days later, the bond had sold off a bit more but the RSI had moved slight into neutral territory between oversold and overbought.  This can be either an anomaly or a signal that rates are set to move even higher as bonds sell off further.  After discussing it with my client he drew the conclusion that it was safer to lock and that’s what I was hoping he would decide.  I locked his loan that morning and the next three weeks or so, mortgage bonds had some pretty significant selling (about 100 basis points) with rates moving higher (about .25%).

Nobody has a crystal ball.  The best we can do is to get as much information as possible so that we can make the best educated guess – I subscribe to a service that gives me real-time data regarding the various mortgage bonds along with the charts.  The service also provides expert analysis by an experienced (40+ years) bond trader.  Since February 12th, the benchmark FNMA 4.0 mortgage bond has traded in a fairly narrow range of 102.04- 102.74 and closed up 10 basis points today (March 12, 2018) to close toward the middle of the range at 102.34.  What this says is that there is not a lot of volatility in the bond market right now.  Expectations are for a couple of rate hikes, maybe three, by the end of the year.  Fed Chairman Powell doesn’t seemed to be too concerned with inflation just yet, and the economic indicators are all strong and getting stronger in many cases.  It’s anybody’s guess as to which way the bond will break out of the current channel but my recommendation would be to play it safe and bet that it’s going to sell off which means rates will move higher.  Here’s a look at the current bond chart: 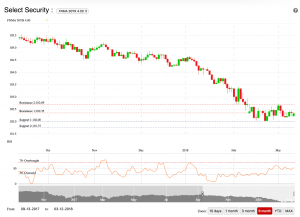 Please feel free to contact me if you have any questions regarding rates or loan programs.  Rates can vary quite a bit on conventional loans based on property type, down payment amount, occupancy type, and credit score.  With FHA and VA, there are some variances with credit score but not nearly as much as with conventional.